In the class, the students receive guidance in constructing stories, researching background, creating characters, learning about plot and genre and how to submit work to publishers.

I've taught this class before and have lately started using www.cafepress.com to publish the finished collection of short stories FOR FREE. The book is then placed on the site for sale to anyone who wants a copy. They're published print-on-demand. We've done this one time before:

The class will meet on Tuesdays and Thursdays for four weeks, from 6 p.m. to 9 p.m. If you want more information, go to:

I've been teaching writing classes for almost 18 years. I really enjoy getting to know the students. And there's an old adage that's really true: If you want to truly learn something, teach it. My students ask me questions I never even think of on my own. Over the years, I believe they've helped me as much as I've helped them.
Posted by Mel Odom at 9:59 AM 1 comment: 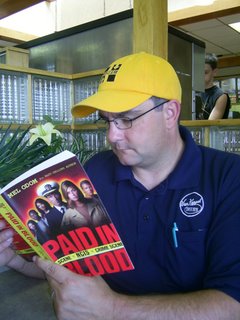 One Free Book Has Already Found A Home!

Wow! The internet has got to be the fastest means of communication in the world!

No sooner offered than taken.

This is located at http://www.bills-world.blogspot.com/

Hop on over and tell Bill hi. He's a great guy and has a lot to say.

I'm giving away 15 free copies of NCIS: BLOOD EVIDENCE (the second book) to anyone who posts a picture of themselves reading a copy of NCIS: PAID IN BLOOD on their webpage.

If you don't have a webpage and want a free one, sign up for one at www.blogspot.com and keep your peeps apprised of your life!
Posted by Mel Odom at 3:37 PM 1 comment: 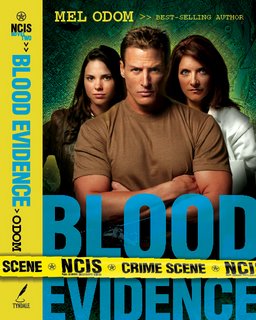 My editor, Jan Stob, at Tyndale books just sent me the cover proof for the second NCIS cover. It'll be out the first part of next year.

I wanted to share. If you look at the background, you'll see art department worked in a map behind them. I think it's great!

First of all, I'm not big on poetry. I'm too concrete, maybe. But somehow a lot of today's poetry seems over my head. I just don't get it. It's too abstract or something. Or maybe I just want it to be easy.

But on a recent camping trip, my 8-year-old got ticked at his mom because she told him to stay out of the water because it was getting dark. He stalked over to the lake and ignored us. Till the fire was ready and we broke out the hot dogs.

Anyway, that image sparked my creativity and before I knew it, I had a haiku poem composed in my head. So I thought I'd share today.

Ingenuity! Don't leave home without it!

I just read one of the most awe-inspiring stories ever this morning. I usually read MSN.com news every morning, to keep up on things, feed my story-producing subconscious, and to have stuff to talk about with my 17-year-old, Shiloh. Shiloh has gotten quite interested in the things that are going on out in the world, and constantly challenges my knowledge base (he can look things up on the internet and make sure I'm right!).

Anyway, the story I've linked to below will blow your mind. And it should get every writer out there thinking about ways to self-promote (and I've already got three novel plots out of it!).

Just a brief note. Many people have asked me how to write and would I give them pointers. In the spirit of that, with the codicile that I only know as much as I've taught myself, I've started a new blog where you can actually watch me think and write and explain the process.

I mean, on days when you're tired of watching paint peel or your toenails grow. Or when you get bored of gargling soda and listening to the different pitches you can get out of your tonsils.

I think I have something to say, but my wife is usually there to tell me when I'm wrong. I'm totally uninhibited on the blog, baby!

You'll find it at www.workingthemagic.blogspot.com.
Posted by Mel Odom at 5:35 PM No comments: 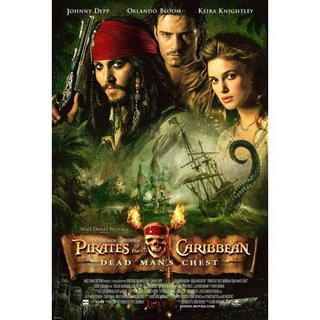 At present, I'm under the gun on a deadline, trying to get words to hit the paper, so I haven't been blogging as much as I probably should have. Since I've had a few emails asking me why I haven't been posting, I decided to let everyone know I was still alive.

The foot is finally starting to heal, though the walking we did while taking Chandler to the park on the Fourth kept me off of it for any extended time for a couple days. I hate not having my feet under me, but the pain is enough to get the job done. So I sit and sulk and write what I think is going to be some of my best stuff because it feels SO right. It's just taking longer.

Friday, needing a break from constant computer-face and to follow up on a promise I made to the family, I took Sherry, Chandler and Shiloh to see DEAD MAN'S CHEST, the second Pirate of the Caribbean movie. If you haven't seen the first movie, CURSE OF THE BLACK PEARL, you should rent it and do so. The movies are best viewed in sequence, though they don't have to be.

DEAD MAN'S CHEST works as a good jumping on point. I had a blast at the movie. All the action. All the humor. All the special effects. Chandler and I were the only two really happy. He's 8 and I was hanging in right there with him. Sherry and Shiloh wanted some kind of resolution, even though they knew going in that the second movie was going to have a clifhanger ending. Neither one of them has seen STAR WARS THE EMPIRE STRIKES BACK! (Can you believe it?).

Chandler and I just wanted pirates, swordfights, pirates, monsters, pirates, undead things, and...well, pirates. We got them. We were mucho happy.

Go see the movie and let me know what you think.
Posted by Mel Odom at 1:30 AM 2 comments: