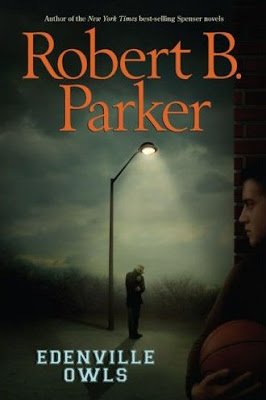 New Robert B. Parker Book Is Out!

Spenser fans everywhere are going to love this book. Although Spenser was raised by his father and uncles in Laramie, Wyoming, 14-year-old Bobby Murphy almost comes closer to the childhood many longtime fans envisioned for Robert B. Parker's signature character.

Bobby Murphy is a wonderful, though idealistic, protagonist. He's more or less the brains and eventual leader of a five-man junior varsity basketball team called the Edenville Owls. They ended up calling themselves that because the only uniforms they could find were all yellow. He's on the cusp of young adulthood, just starting to notice the finer intracacies of the world: such as the opposite sex and problems in the adult arena that normally stay behind closed doors.

After his last teacher was removed from the school, Bobby and his class got a new teacher: Miss Delaney. Miss Delaney is young and beautiful, the perfect teacher for a young boy on his way to becoming a man to fall in love with. However, Miss Delaney also apparently has some dark secrets.

While in detention, Bobby and one of his friends sees Miss Delaney arguing with a man. After a heated exchange, Miss Delaney slaps the man. Bobby shouts at the man to leave her alone, then he and his buddy charge to the rescue but are made to return to detention. Later Miss Delaney asks Bobby to forget he ever saw anything. In just those few moments, Bobby's plunged into a mystery that will tear away a lot of his remaining innocence as he pursues the truth of who the man is and exactly what's going on.

Three main storylines weave throughout the book: the mystery involving Miss Delaney, Bobby's work to bring his basketball team to the state tournament, and his evolving relationship with Joanie, a girl he becomes friends with that eventually comes between him and Nick, one of his best friends. Any one of the stories would be enough to keep a reader turning pages. That they're all together and complement each other well is just excellent writing.

Parker is going to take a lot of heat over Bobby, though. Bobby thinks like Spenser. He acts like Spenser. And both characters are troubled over the same vagaries of life. But these are the themes that Parker constantly writes about.

Readers familiar with Parker's work are going to find a lot of familiar ground here, though altered somewhat because the story is set in the 1940s and Parker does, for the most part, stay within the conventions of his youthful heroes. However, argument can be made that the Hardy Boys were taking on much more dangerous assignments on a regular basis.

The fact that World War II was only an eyeblink ago in the story's setting is important. The villains are made more menacing because of that. And Parker is given a freer rein to talk about wickedness. Strangely enough, some of that wickedness is still in our world.

The writing is as pure and economical as always. There's an innocence about Bobby that is endearing, but at the same time he comes across as older than his 14 years. Parker weaves his plotlines effortlessly and readers will cruise through this one. More than that, this is a book that adults and young readers can share and both enjoy. I've handed off my copy to my 18-year-old, whom I've also introduced to Parker's work, as well as Crais's and other writers.

I envy the young readers who will find this book. This will be their first Robert B. Parker novel and they'll find so many more books waiting for them as they grow up. Hopefully Parker will find time in his busy schedule to pen another Bobby Murphy book. 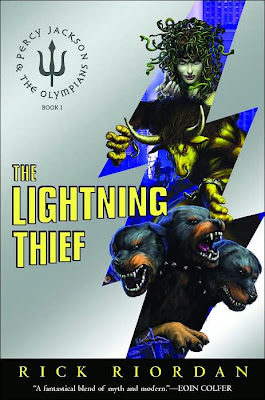 Another Great YA Series That's Good For Kids And Grown-Ups!
I held off buying The Lightning Thief for a couple years. The market seems glutted with YA fantasy at the moment, and I read quite a bit of it with my 9-year-old. We've discovered several good series, but The Lightning Thief seemed too long to hold his attention when it first came out.
This year we noticed it in the book fair at school, then saw that it was an Accelerated Reader book. So I picked it up and read a couple chapters to try it out. I was 50 pages into it when I realized I needed to be reading this to my son.
I did read it to him. We flew through the book (375 pages!) in 6 days because he kept pestering me to read it to him. We finished it up in a 5-hour marathon yesterday, hanging onto every page as Percy and his friends tried to save the world and put things to rights in their own lives.
The Lightning Thief is a great book for adults and kids. I've already recommended it to a couple of adult friends who experienced the same kind of can't-put-it-down pull that I did.
Percy Jackson, the hero of the book, comes across as every kid you'd ever meet or ever would. He's no brainiac (he has dyslexia and ADHD) but he has friends who are. But he is courageous and clever, stubborn and loyal. He is the best he can be, and he's getting even better.
Riordan works in many of the Greek myths in the novel. There was a time when knowing Greek mythology was a pre-requisite for having a "classical" education. Many morals and philosophies are presented in the tales.
From the very beginning of the novel, we find out Percy is different when he ends up fighting a harpy in the museum while on a school trip. He's been kicked out of 6 schools in 6 years, lives with his mom and step-dad, Smelly Gabe, an evil guy who deliberately makes Percy's life hard. Then, when he's on a well-deserved vacation with his mom, he finds out he's a Half-Blood, the son of one of the Greek gods. But his mom doesn't know who his dad was and that's just one of the mysteries Percy ends up solving.
The cool part of the book is peeling away all the mysteries of Percy's life and who really took Zeus's magic thunderbolt. Along the way he gains powers that set my son's head to spinning with hope and delight. Percy's a superhero without the costume, and there are plenty of villains in his world.
Riordan is a teacher who obviously loves kids as well as the subject matter. The Greek gods were a cantankerous lot, and Riordan delivers them well. Not only does he give his readers the stories, but he also brings the gods on stage and gives them personalities.
The series is supposed to run for 5 books. I think it will go on longer. I hope so. I've already ordered books 2 and 3, and my son and I are looking forward to them. The books take a while to read outloud to younger readers, but the effort is well rewarded. The story is rich and deep, and will keep your child's attention. In addition, you'd be surprised how much you can talk about even when you're not reading. And your child may just want to wander around the internet learning more interesting facts about Greek mythology.
The Lightning Thief is well worth reading and is probably in most public and school libraries.
Posted by Mel Odom at 4:26 PM 1 comment: 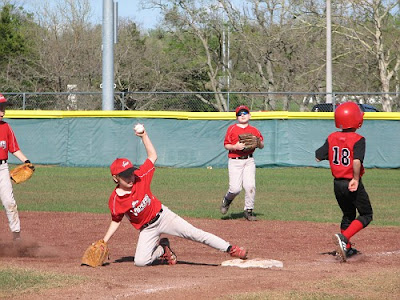 Have I Told You Lately That I Love Watching My 9-Year-Old Play Baseball?

Chandler had to dig this one up out of the dirt to get the runner out (and he did!), but he did it in true Cowboy-Up style, presenting the ball so the umpire could clearly see he had control. He also had to stretch out to tag the base.

Our season is getting better, and all the kids are coming up with real magic. But this is my kid and he's my kryptonite. I love him and he continues to amaze me every day. 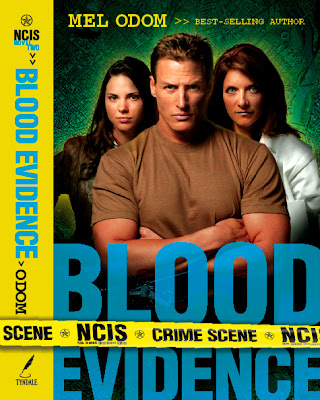 My New NCIS Novel Is Out On The Shelves!
I think this is one of the most emotionally-charged books I've ever written. The characters really came alive in this story and I ended exploring a lot of themes about being an adult child as well as a parent. This was a story that was begging to be told from the first book in the series, Paid In Blood.
While the rest of Will Coburn's NCIS team struggles to find the truth about a year-old murder that everyone thought was technically solved, medical examiner Nita gets pushed to the edge by her own self-destructive urges, the past she thought she'd buried, and feelings of love and need that she's only now starting to understand about her daughter and husband.
I loved writing this book. Hope you enjoy the read.
Posted by Mel Odom at 11:48 AM 11 comments: