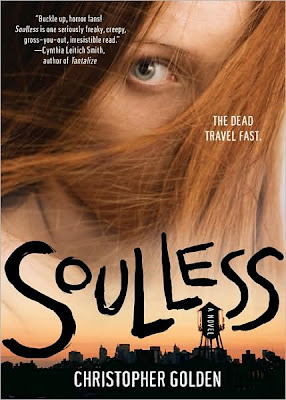 ...but I enjoyed this book a lot one night when I was stricken with insomnia and just couldn't get interested in anything else. It provided hours of entertainment and I was ready for bed (and nightmares) by the time I finished it. Nothing like zombies to ring in the New Year. 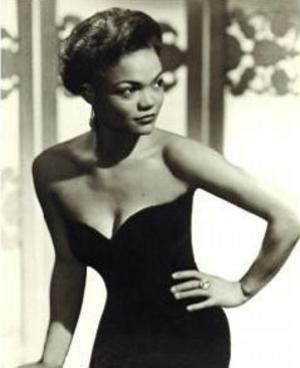 
My earliest memories of Eartha Kitt were of her in the role of Catwoman on Batman in the 1960s. She replaced long-time fave, Julie Newmar. When Ms. Kitt stepped into the catsuit, she brought a whole new air of menace to Catwoman. 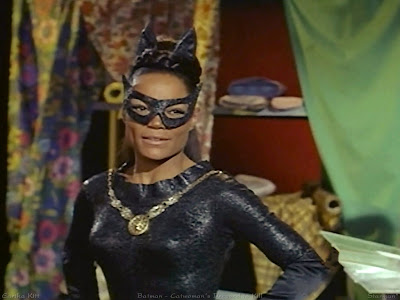 She made her career and her life her own, and every time I saw her she seemed full of zest and challenge. I still remember her as Catwoman when I first think of her, but she was so very much more. 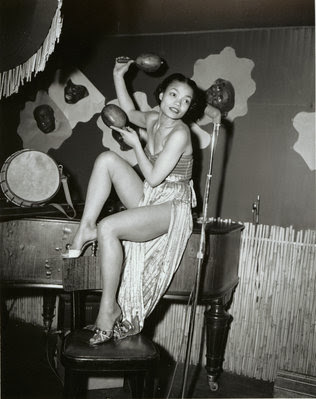 My 11 year old knew her as Yzma from The Emperor's New School on Disney, so we've both lost someone from our childhoods who was dear to us. 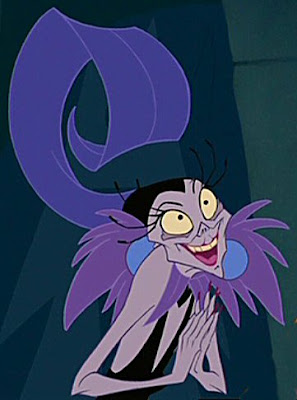 Eartha, God bless, and thanks for all the memories.
Posted by Mel Odom at 11:37 PM No comments: 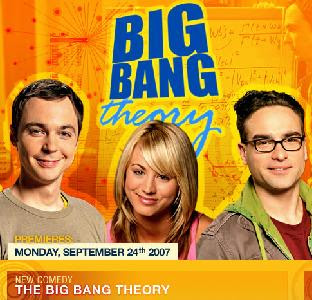 I teach on Monday nights, so I didn’t know what I was missing until my wife and son started talking about The Big Bang Theory. The show is now in its second season and as part of the CBS comedy bloc on that night. At first their disjointed stories about the characters and situations didn’t really catch my attention. I could tell they were enjoying the program, though.

Eventually, the Monday night class ended. I began working those nights again, but Sherry and Chandler called me to watch the show. By the first commercial, I had a lot of questions for them. I didn’t know who the characters were or what exactly the romantic entanglement was. However, I was captured by the geekdom that runs rampant throughout the series.

The Big Bang Theory centers primarily on the relationship of Leonard and Sheldon, who have been friends for quite some time and now live together. Leonard is portrayed by Johnny Galecki of Rosanne fame. Jim Parsons brings Sheldon to life in a way I feel certain no other actor could do. 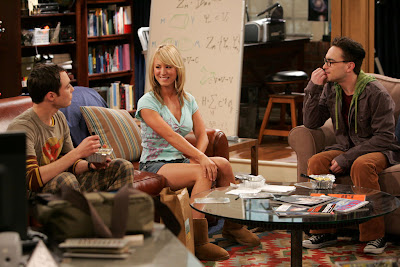 Their next door neighbor, and Leonard’s major crush, is Penny. Kaley Cuoco plays the blonde waitress of a local Cheesecake Factory restaurant perfectly. She’s simply stunning to look at, dresses sexily without even meaning to, and generally doesn’t have a clue during the geek conversations Leonard and children have. Sometimes the on again off again relationship between Penny and Leonard wears a little on the nerves, but the overall character mix is wonderful. 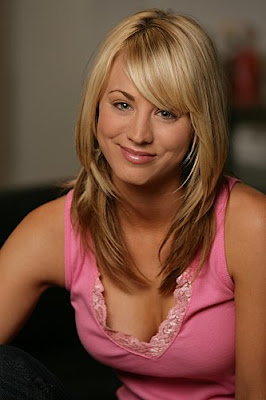 Every time I watch the show, I find something new to love about the ensemble. Leonard and Sheldon had me with the comic book trivia (the framed comic books and comic book t-shirts simply added to the love). These are the guys that I generally run into at science fiction conventions. They speak Klingon, know how to mix matter and anti-matter, yet don’t have a clue about how to understand girls. 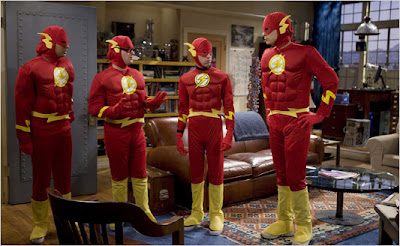 I love the Halo combat sessions they play against each other and the many ways they have of getting on each other’s nerves. One of the best episodes in the first season was when Sheldon caught a cold. As soon as Leonard knew Sheldon was getting ill, he bailed. He also warned their two friends, Howard and Raj. The three of them already had emergency plans in place to stay away from Sheldon while he was sick. Unfortunately, Leonard reached out to Penny and managed to suck them all back into Sheldon’s needy clutches.

Although I don’t understand all of it, I really appreciate the science that is mentioned as well. My 11 year old has a touch of Aspergers and his IQ is higher than mine. We end up in really deep discussions about that science and comic books and television shows Leonard and Sheldon talk about. One result is that my son and I are now watching Star Trek: The Original Series together.

If you haven’t seen The Big Bang Theory, you really should. Even if you don’t appreciate all the geek trivia and pop culture that leavens the episodes, there’s a lot of comedy that goes on between the characters. Parsons is an excellent actor and his Sheldon portrayal deserves attention. I think Sheldon is going to become one of those iconic characters that will represent the best of television in the years to come.

The first season is available on DVD. That’s how I got caught up quickly. More than that, this is a series I know I will watch again and loan out to friends who haven’t seen it yet. 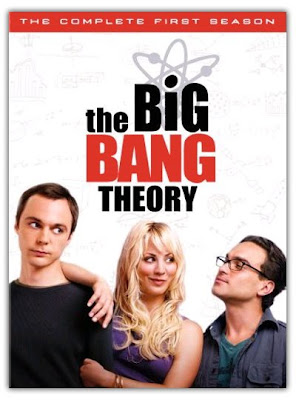 I've been a Doc Savage fan for almost 40 years, as of my birthday this week. I discovered the Bantam reprints with the famous James Bama covers on them in 6th grade and fell in love with the globe-trotting adventures. At the time, there was nothing like them. He was my generation's Harry Potter.

While cruising the pulp sites today (because I haven't let go of my love for pulpy goodness), I found the Doc Wilde book cover. I pre-ordered my copy immediately from Amazon.

And I found more information about the author and the books here. Evidently this book is the first of a series.

I hope they seriously rock! 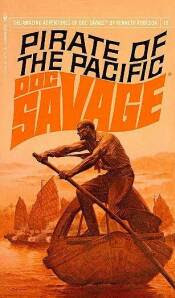 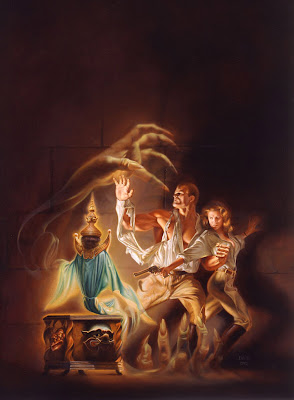 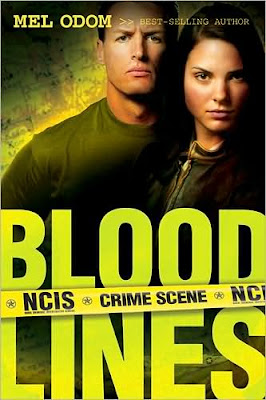 
The third book in my NCIS series covers the damaged relationship between Marine Gunnery Sergeant Shel McHenry and his father, with seeds that go back to the Vietnam War. This is a book that's near and dear to my heart, and I take a stab at explaining some of the complexities between fathers and sons.

If that's not enough for you, there is a lot of blistering action, frantic pacing, and junkyard guard pigs! 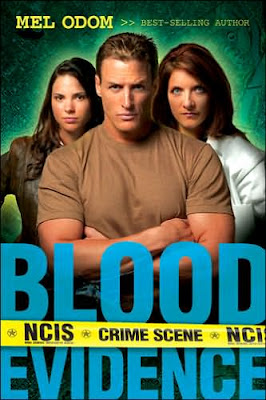 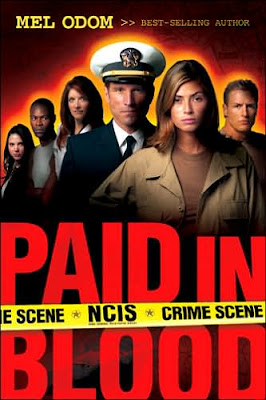 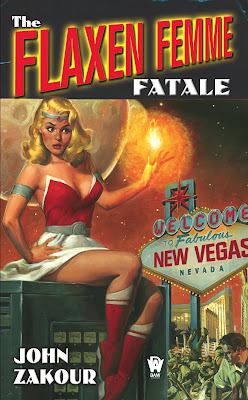 I love these covers. They're what first pulled me to the books. Zakour writes a fun SF/private eye pastich that's light and frothy. No brain strain here, and they're perfect for a lazy weekend.

I miss the golden days of science fiction when everything seemed so big and so wondrous. The stuff that science is able to do these days is even more fantastic than I'd ever believed we see, but everything seems inner directed instead of outward to all those exciting planets I'd imagined while growing up.

Zakour allows me to be that 12 year old kid again, and I appreciate that. If you haven't read the series, you should look into it.

I especially love the stressed look of the older covers. They look like old pulp magazines you'd find in some forgotten corner of a swap shop. Sadly, the newer editions seem to be getting away from that, but I still enjoy the cheesy good girl art. 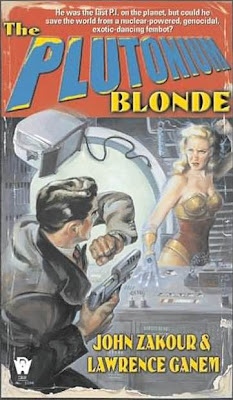 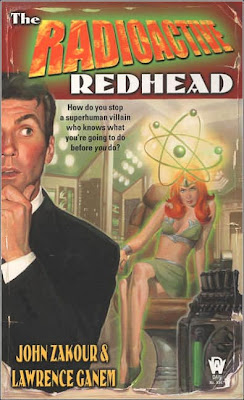 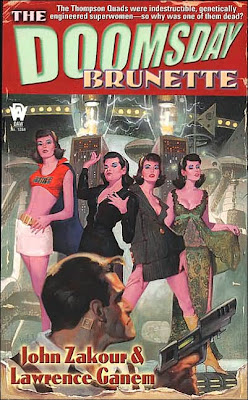 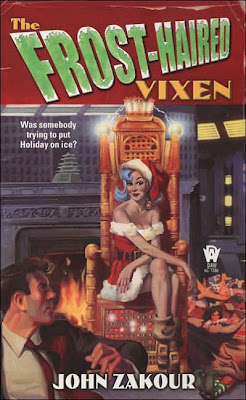 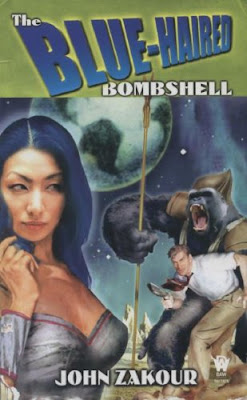 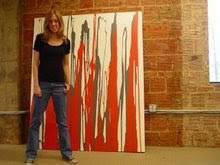 Diary of a Book Addict!

I've added a new blog over in the roster. It belongs to one of the OU students I coach in writing. She reads A LOT! Go check out her reviews here and welcome her to the cyber realms!
Posted by Mel Odom at 7:54 PM No comments: