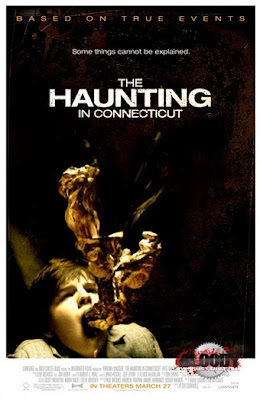 One of the startling trends that results from a downturn in the economy is the increased popularity of horror movies. When I was a kid I didn't like to watch them. My imagination made them way too real.

However, as I got older and realized there were more substantial horrors (like debt, unemployment, and the fact that my world could turn south on a dime), things like zombies, vampires, and other supernatural creatures -- and the odd serial killer or two -- stopped bothering me. After all, I'd never seen any of those things.

I learned to appreciate good horror in the spirit (so to speak) in which it was intended. Horror either delivers a few quick chills, an impending sense of doom, or ribald humor. Anything else, and it fails.

A Haunting In Connecticut has its basis in an urban legend that is much more tame than the movie version. Doubtless, it was still creepy to everyone that lived there. I went to the theater Friday night with a couple of my students from OU and we had a blast. The movie has good pacing, is well acted, has some good cinematic moments, and the atmosphere created by the use of surround sound and music is terrific.

If you enjoy a good haunted house story (and who doesn't?), this one will certainly fit the bill.

While there, we also saw the trailer for Sam Raimi's horror film coming in May. It's called Drag Me To Hell and it looks decidedly creepy. It has to do with a gypsy curse, and you have to love that. Hopefully the movie will release before my students flee college for the summer. 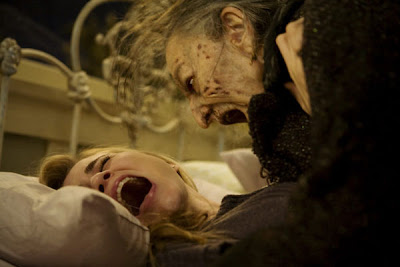 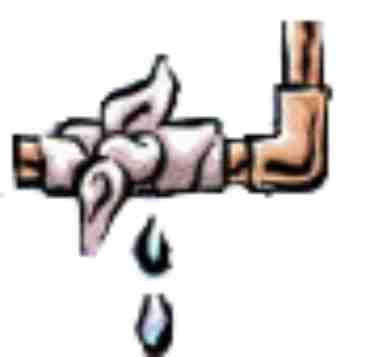 I'm filing this one under, "Only My Son."

Anyone who knows my 11 year-old knows that he is drawn to stories and to drama. When he sees movies and television shows, his brain automatically starts making left turns till he comes up with key concepts all on his own. He also loves words and often uses big ones. I have a tendency to do it around him myself. So it's not totally his fault. But it drives his mom nuts sometimes. Chandler will never use a nickel word when a 50¢ word will do.

And he's into the drama. Didn't I point that out already?

So anyway, about once a month I have to run sulfuric acid down the standpipe behind our washer to keep the drains clear. Occasionally, I do something boneheaded. Like leave the drain hose out after I finish that. I did that today.

Sherry and I were in the living room talking when water started running all over the floor in the kitchen from the utility room. Chandler got caught in the flood. We knew that when he calmly told us, "Something has gone horribly wrong."

Most kids would have pointed out that the water was flooding the floor, if they didn't just slink off to their rooms before the cleanup started and they got caught up in middle of it.

Not Chandler. "Something has gone horribly wrong."

In the middle of the cleanup and not happy with the situation, Sherry and I still couldn't help laughing at his commentary. We kept repeating it over and over, and I think it's gonna be one of those phrases that tend to stick in the family.

"Something has gone horribly wrong."


It won't be just because it's fun to say, but also because I have that kind of life where things go "horribly wrong."
Posted by Mel Odom at 2:38 PM 3 comments: 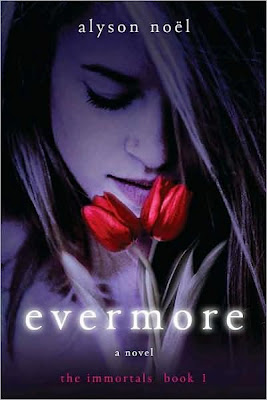 One For The Twilight Crowd

Just found this book (was drawn in by those tulips) and actually enjoyed it a lot. If you loved Twilight, you'll love this new series. I read the first Twilight book and had had enough. Never went back. But with this one, I've already pre ordered the second book.

You can find my review at Bookhound.
Posted by Mel Odom at 9:28 AM 1 comment: 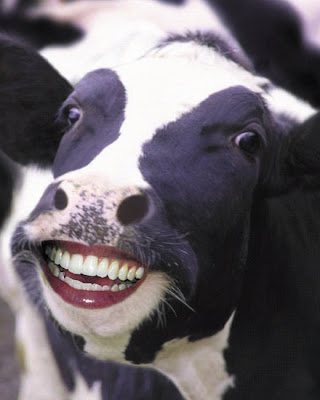 My 11 year-old recently had a series of bad asthma attacks. For a while there, we thought we were going to have to hospitalize him. The doctor thought so also. We had to sit in the doctor's office for 4 hours one day trying to get his lungs open. If you have a child with asthma, you know how exhausting the whole process can be emotionally and physically for parents and child.

My own allergies have gotten so bad that I had to have nasal surgery last July and have since been put on weekly allergy shots for the last seven months. I've noted a definite change in my own health during that time.

Weekly shots weren't an option for Chandler. He's as bad as I am about taking shots. Or, at least, as bad as I used to be. Getting shots every week kind of gets used to the whole process. Today I even watched Lori, the allergy technician, give me a shot inside my forearm. I would have never done that before.

Still, the idea of holding my son down to give him a shot every week wasn't appealing. I could do it, I think. He's now a black belt candidate in karate, 5 feet tall, and about 135 pounds. It wouldn't be as easy as it used to be.

Then my doctor suggested sublingual allergy drops that could be put under his tongue every day. So we opted to do that. I went in for my weekly shot today, and Lori said she could do Chandler's allergy testing today as well. I called him into her office and we ambushed him. I'd already promised him a video game, so this was a pleasant little bonus I hadn't expected and the blackmail was already in place.

You have to understand my son: he loves animals. And for some weird reason, they love him back. Every animal in our house dotes on Chandler. They just can't get enough of him. He's got Aspergers and one of the traits is a general enthusiasm for animals.

At this point, he has three cats, two dogs, and a turtle. His rabbit died last fall.

And his mom isn't going to have a cow. I mean, she'd have a cow if Chandler wanted a cow. But at least a cow would be safe for him to hang out with and sleep with the way he does with his other pets. Except the turtle. 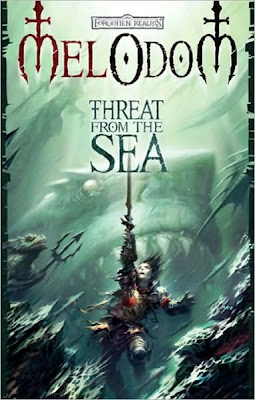 THREAT FROM THE SEA Out April 7!

You get a real treat with this book. For those of you who missed my first Wizards of the Coast trilogy, it's been repackaged with a brand spanking new cover that looks simply awesome.

Over the years, a lot of people if asked me where they could get new copies. Well, here you go, and it's about as convenient and well priced as you can hope for.

To order, cast a mystic spell by clicking on the word: KA-BLAM!
Posted by Mel Odom at 4:40 PM 2 comments: 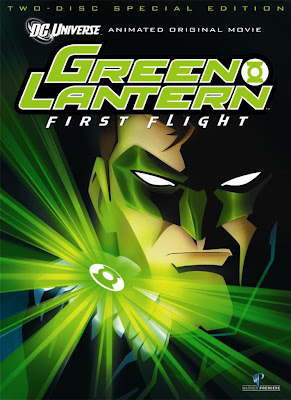 This is going to be Hal Jordan's first intergalactic mission as Green Lantern. A lot of the people who were involved in the Justice League series are going to be doing this one.

My son and I are both excited about this one. It releases on July 28, 2009 on single disc, double disc with extras, and Blu-ray with everything.
Posted by Mel Odom at 6:42 PM No comments: