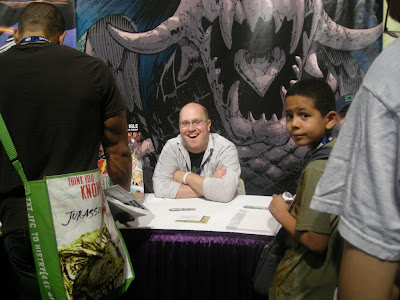 Starting with issue #34, Sterling is going to be scripting the adventures of the Teen of Steel. He's going to be part of a tightly knit Superman franchise involving Geoff Johns and James Robinson. This is a BIG deal, people, and I'm very excited for him. 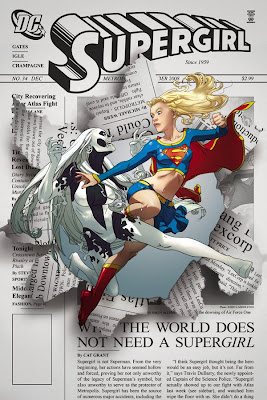 I've known Sterling for years. He graduated from OU and worked at the comics shop (Speeding Bullet Comics) where I met him. Working on comics and movies are all he's ever dreamed of doing.

Speeding Bullet Comics owner Matt Price plans to stock plenty of issues in October when Supergirl #34 comes out. But you might want to get your copy ordered early. Supergirl is getting plenty of buzz with this latest announcement, and copies are going to go fast.

Shiloh and I got to see Sterling and talk to him while at San Diego Comics Con and (you can tell from the picture at his signing) he's as happy as can be.

Now if only he could get Sarah Michelle Gellar into the Supergirl suit! 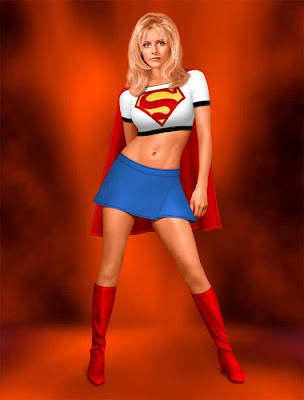 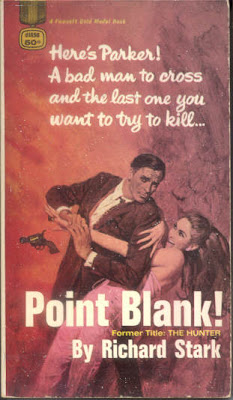 During my formative years, I discovered the Parker series by Richard Stark. Stark is actually a pseudonym for Donald Westlake, and Parker is a professional criminal specializing in robbing institutions and armored cars. I still love those books.

The series started in the early 1960s and has continued. The latest book just came out this year.

Before I went to San Diego Comics Convention, I learned that Darwyn Cooke was going to write and draw four graphic novels early in the Parker series. I've been excited ever since.

While at the convention, I got the opportunity to talk to Darwyn. I was happy to learn that he's leaving those early Parker novels set in the 1960s. That's where they belong. 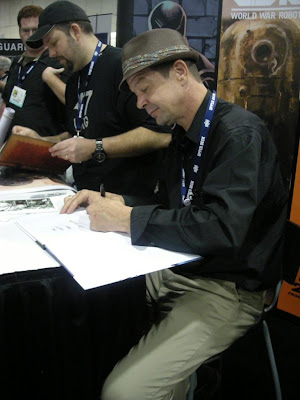 Darwyn was signing cards with some of his artwork, which looks utterly fantastic and has me even more excited. Unfortunately I learned after I got home that the card I got was only one of a set that was being given out.

Still, I'm getting my card framed and hung on my office wall.

If you haven't heard of Darwyn Cooke, you should have. He had a fantastic run on Catwoman with Ed Brubaker and ushered in the whole Justice League: The New Frontier comics and direct-to-DVD movie. 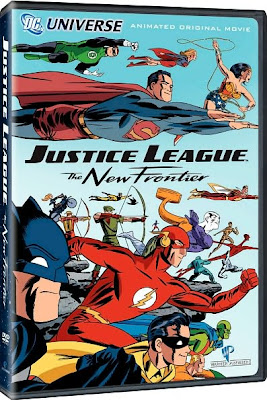 But Parker is a love Darwyn and I both share. This was the original cover of the book before the Gold Medal version above. 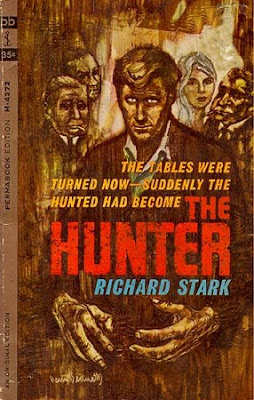 This was the cover of the Berkley edition I purchased when I was a kid. 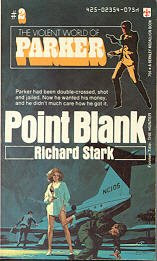 Before Mel Gibson did his Parker riff in Payback, Lee Marvin did the original movie with Angie Dickinson. The name was changed to Point Blank! 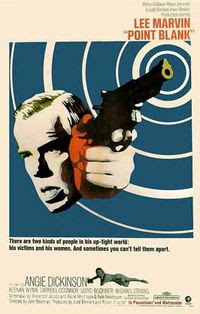 The early Parker novels are out of print and hard to find. Usually when you can find them, they're either dog-eared or incredibly expensive. Or both, believe it or not.

However the University of Chicago Press is reprinting at least the first three. Here's the cover of the first one. It'll be out in a month or so. I've already pre-ordered my copies.

If you haven't read Richard Stark before, give the books a try. Either the reprints or the Darwyn Cooke interpretations will draw you into a bleak, hard world that will keep you clinging by your fingernails till the final page. 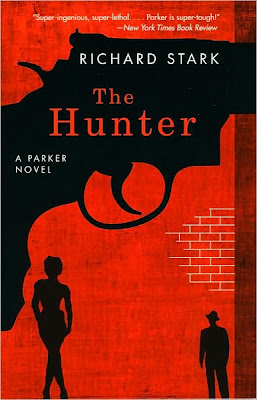 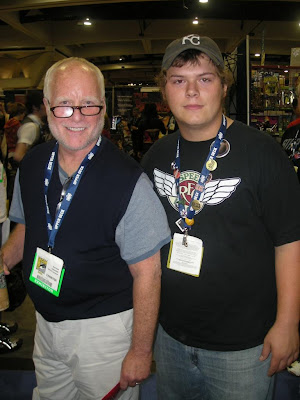 People that know me know I go to San Diego Comic Con with one burning desire: to take as many pictures of myself with scantily-clad superheroine babes as I can. (Please rest assured, those are coming.)

However, Tony, a buddy who's an art director at Harlequin where I was signing, found Richard Dreyfuss wandering around and brought him to our booth. It was a major coup!

Richard was incredibly bright, witty, and charming. You don't always get that. He's a guy you can meet and talk to. 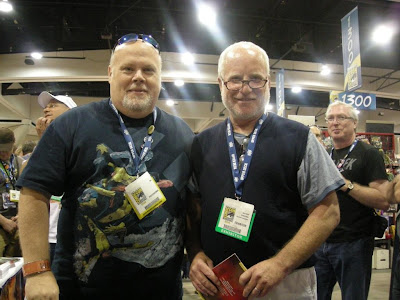 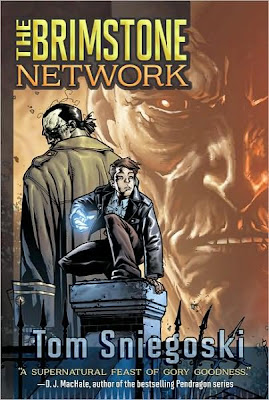 Can't Wait To Read This One!

Just got back from San Diego Comic Convention, so expect lots of postings over the next few days. I was on a panel with Tom Sniegoski and we talked about his latest release, the first book in what's going to be a great supernatural adventure series for the 9-12 year old crowd. (Yep, I'm one of them. Just ask my wife.)

The kid on the cover? The last surviving member of The Brimstone Network, mankind's last defense against supernatural terrors. The guy behind him? A walking engine of destruction made up of the parts of the heroes that recently died in a massacre that nearly ended the Brimstone Network. 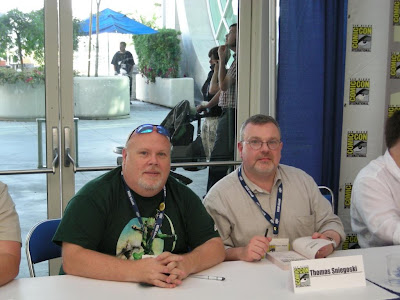 Tom and I chatted for a long time about our pulp roots, and this one is going to be a slam-bang adventure. My son got one look and got excited too. We're starting the book NOW! Expect a review soon.
Posted by Mel Odom at 2:49 AM No comments: 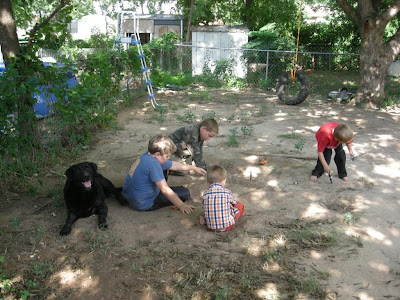 When Did Play Stop Being So Simple?

The kid in blue is my ten-year-old. Chandler has a Wii, a PS3, an X-Box 360, and hundreds of DVDs to choose from. He has access to the internet. He has books and comic books to read.

So what does he do in the middle of the afternoon of July 4th? He goes out into the sweltering weather and digs in the sand we put out back for the above-ground pool we had last year. (My wife didn't like the pool after last year so she got rid of it. Now I'm saving up to put in a rigid-sided above-ground pool next year because she misses a pool. This is why men go crazy!)

Lately, Chandler has gotten fascinated with playing in the dirt. Building cities, moats (he had to borrow the waterhose for that), castles, and attacking his playmates. (I guess that whole theory of land-grab wars has gotta start sometime.) All you need is a gang of guys willing to brave the heat with you, loose sand, and an imagination.

Oh, and a happy-go-lucky dog. Nothing quite like getting dirty and covered with dog musk and sweat before you go back into the house. 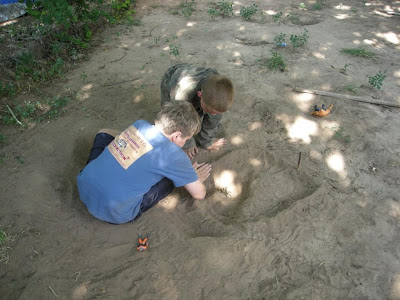 Scientists make a big deal out of terraforming new planets. I suggest throwing about a zillion play buckets, a zillion shovels, and a zillion kids onto a frontier planet. Give 'em till lunch and presto! The whole planet will be terraformed. 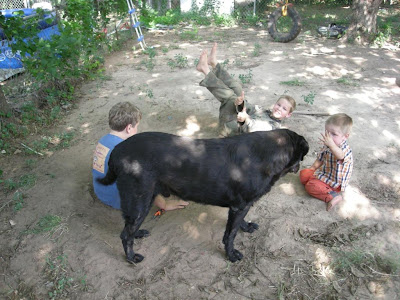 One of the bad things about backyard play with your dog is that eventually the dog will get bored and decide what you're doing is interesting.

Or maybe he just wants to exercise his creative instincts as well.

This is Max. He weighs 118 pounds and could probably eat all these kids in the picture at a single sitting, judging from his weekly feed bill. 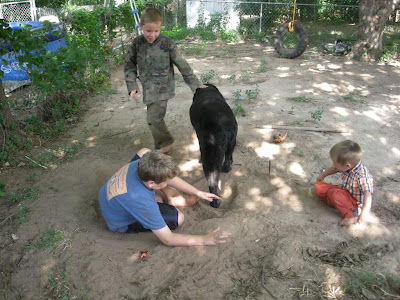 As you might guess, Max's favorite movies involve gigantic monsters terrorizing and destroying cities! His hero is Godzilla.