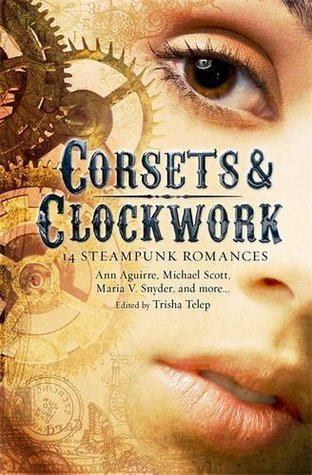 Don't know how I missed this one when it came out in 2011, but I did.  I have since added it to my eLibrary.  Hoping to get to it soon.
Bestselling romance editor Trisha Telep brings an exciting new element to the fast-growing sub-genre of steampunk, which bends and blends the old and the new in increasingly popular dark urban fantasies. Young heroes and heroines battle evil, in various forms with the help of super-technological or supernatural powers, while falling in and out of love. The contributors include: Ann Aguirre a bestselling author who writes urban fantasy (the "Corine Solomon" series from Roc), romantic science fiction (the "Jax" series from Ace), apocalyptic paranormal romance (as Ellen Connor, writing with Carrie Lofty, from Penguin), paranormal romantic suspense (as "Ava Gray from Berkley"), and post-apocalyptic dystopian young adult fiction ("Razorland and Wireville" coming in 2011 from Feiwel & Friends). Tessa Gratton, her debut novel "Blood Magic" arrives in 2011 from Random House Children's Books, followed by the companion "Crow Magic" in 2012. Jaclyn Dolamore is the debut author of "Magic Under Glass" from Bloomsbury USA. Lesley Livingston is the award-winning author of "Wondrous Strange and Darklight", the first two books in the bestselling trilogy from HarperCollins. Frewin Jones is the bestselling author of the "Faerie Path" series and the "Warrior Princess" books, among many others. Caitlin Kittredge is the author of the "Iron Codex" trilogy, a Lovecraftian steampunk adventure. Dru Pagliassotti's first novel "Clockwork Heart" was one of the first in the rising new genre of steampunk romance and was named by "Library Journal" as one of the five steampunk novels to read in 2009. Dia Reeves is the debut author of the critically acclaimed "YA Bleeding Violet". Michael Scott is the Irish-born, "New York Times" bestselling author of the six part epic fantasy series, "The Secrets of the Immortal Nicholas Flamel". Maria V. Snyder is the "New York Times" bestselling author of the "Study" series ("Poison Study", "Magic Study", and "Fire Study") about a young woman forced to become a poison taster. Tiffany Trent the author of the acclaimed "YA" dark fantasy series "Hallowmere", which was an IndieBound Children's Pick and a New York Public Library Book of the Teen Age 2008. Kiersten White is the debut author of "Paranormalacy", the first book in a new trilogy, which was published by HarperTeen in August of 2010. Adrienne Kress, is the author of "Alex and the Ironic Gentleman" and "Timothy and the Dragon's Gate". 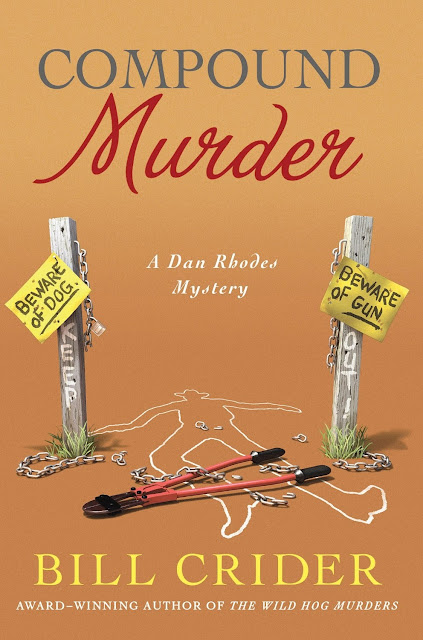 And my wife is happy!
Small-town Texas sheriff Dan Rhodes is in for another puzzling mystery in this next in the entertaining, award-winning series

Before classes start one morning, the body of English instructor Earl Wellington is found outside the building of the community college. Wellington was clearly involved in a struggle with someone and has died as a result. Sheriff Dan Rhodes pursues and arrests Ike Terrell, a student who was fleeing the campus. Ike's father is Able Terrell, a survivalist who has withdrawn from society and lives in a gated compound.  He’s not happy that his son has chosen to attend the college, and he's even less happy with the arrest.

Rhodes discovers that Wellington and Ike had had a confrontation over a paper that Wellington insisted Ike plagiarized. Wellington also had had a confrontation with the dean and was generally disliked by the students. As the number of suspects increases, it’s up to Rhodes to solve the murder while also dealing with an amusing but frustrating staff, a professor who wants to be a cop, and all the other normal occurrences that can wreak havoc in a small town.

Bill Crider's Compound Murder is an enjoyable police procedural filled with surprises, chuckles, and a quirky cast that will captivate mystery readers.

Sharks In A Blender 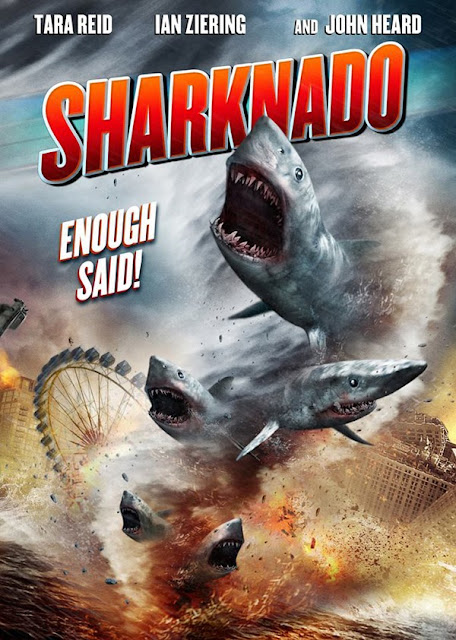 Sharknado is one of the worst movies I have ever seen regarding plot structure, integrity of suspense, and characterization, but my fifteen year old and I LOVED it.  My wife, who was pretending to ignore us and our questionable taste in movies, even laughed a few times.  Sharknado is just so bad it’s great.  Can’t wait for the sequel.


This SyFy Channel original movie conceit that is at the core of the action is that sharks – ALL kinds of sharks, mind you – have gotten swept up in a monstrous hurricane (Sharkicane obviously doesn’t sound as cool as Sharknado) and drop onto the unsuspecting populace of Los Angeles.  Now, to accept that, you have to check all knowledge of meteorology at the door and ignore California’s history.  One, it would be classified as a hurricane coming in off the ocean, and two, there have never been any hurricanes that hit California.  They call it the “Pacific” Ocean because it’s so calm – except for those tsunamis that hit Japan, India, etc.  But that’s on the other side of the ocean.


The collection of characters is the usual ensemble.  The divorced father who has to go rescue his kids, who are rebellious snot rags in the beginning but become massively talented at battle sharks before the end of the movie.  Then there’s the best friend who gives his life fighting for our hero.  The young girl who’s maybe in love with our hero even though he’s twenty years older.  One of my favorite characters was John Heard, a millionaire drunk who carries his bar stool with him to fight the sharks with – until he meets his glorious demise.


Of course, one of these movies just wouldn’t be complete without obligatory other rescues that get in the way of the hero getting to his kids.  The school bus rescue would have taken WAAAY too much time, and you can’t help but notice that there isn’t any rain or aerial-borne water sluicing over our champions.


In fact, the whole movie gets way too dry at times.  I kept noticing those things, how it went from water running white caps in the street, yet there wasn’t a cloud in the sky so often.  My son and I kept pointing that out to each other, and I can see that maybe becoming part of a college drinking game – do a shot every time the weather changes.


Despite its many, MANY flaws, my son and I (and my wife to a degree), enjoyed Sharknado.  It’s not art, it’s not even a decent story, but it is a much-needed exercise in total hilarity – even if it isn’t supposed to be.


Posted by Mel Odom at 8:36 AM No comments: Links to this post 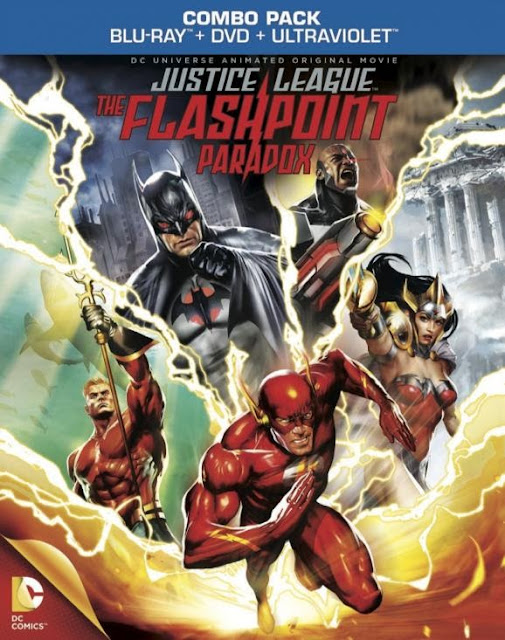 I read the original Flashpoint series by Geoff Johns and Andy Kubert and enjoyed it a lot.  At the time, I did not know that it was going to be the linchpin to change the entire DC Universe.

The Blu-ray version of the comic series/graphic novel/series is condensed a lot, but all of the major points of the story are intact.  Since the Blu-ray is out now and the stories were released a couple years ago, I’m not going to worry about spoilers.

My 15 year old watched the movie version with me and wasn’t familiar with the story.  He’s more into reading Deadpool these days.  Like me, he was in awe of all the ramifications of the changes in the characters.  Thomas Wayne presents a much different Batman than Bruce Wayne, and I can remember being shocked by that when I read the original issues as they were coming out.

The whole Wonder Woman/Aquaman war just never really worked for me.  I just couldn’t see those two characters being so radically different than the heroes I’d grown up with.  I think a lot of comics readers felt the same way I did.  The thing that really worked in the comics, and works again in the Blu-ray, is the friendship that develops between Thomas Wayne and Barry Allen.  I also loved the way Barry is presented, how human and how much of an everyman he is in spite of his superspeed.  His dedication to “recovering” his powers is testimony to the kind of man he is.

The Blu-ray version kind of falls apart in relaying what’s going on in the rest of the world.  There are almost too many jumps, too many characters introduced, killed, etc., but leaving them out would have been a mistake.  I think the video should have been longer to allow such a big story to breathe.

I also want to warn parents that even though this Blu-ray movie is rated PG-13, I think it should have been rated an R for the violence and content.  People are constantly dying, sex is heavily hinted at, and at one point Wonder Woman stabs a young boy with her sword.  Even though the last is off-screen, viewers know what’s going on.

The colors were well done, but I wasn’t all that happy with the character art.  Everyone tends to look the same with that weird triangular head and big jaws.  The characters almost look like caricatures of themselves.
enjoy the DC Universe on video a lot, and I enjoyed this latest release a lot as well, but it’s just not for kids and some parents may make a mistake in thinking that it is.

Posted by Mel Odom at 11:49 AM No comments: Links to this post 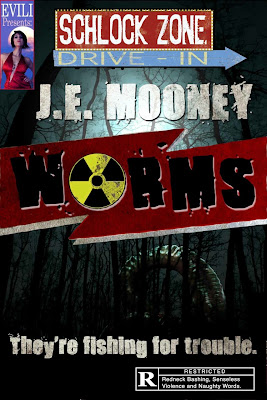 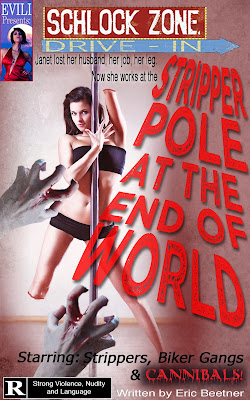 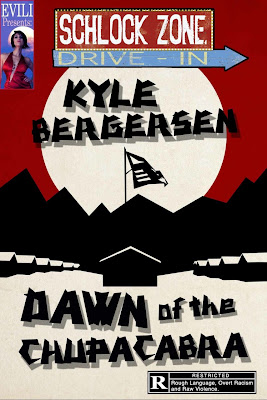 Posted by Mel Odom at 7:41 AM No comments: Links to this post