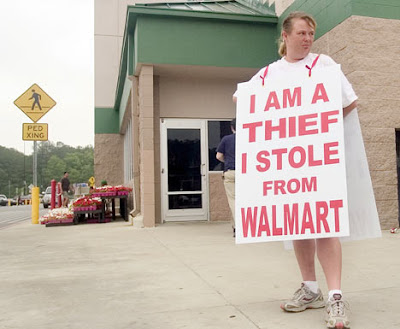 I went to Walmart on Tuesday with my 11 year old to get him some new books to read while at school. He usually reads more when he's away from his computer and video games, and he loves his entertainment.

We saw a young girl, about 12 or 13, standing out front with a sandwich board that read I'M A THIEF. I STEAL FROM PEOPLE WHO LOVE ME. Not Walmart -- people who loved her.

A young father, I'm assuming he was her father, sat on the bench beside her with his arms folded and all closed in. My son was shaken by the experience. I was offended. And several other store patrons were as well.

I went to the store management and complained, and they made certain the two left the premises.

I don't know what the girl did, nor to what degree she should be punished, but I really detested the act personally. Not only that, but an otherwise pleasant experience with my son was colored by explanations of why parents would treat their kids that way and the realization on part of my son that maybe he wasn't as safe from public ridicule as he believed.

I've raised five kids and I've never publicly punished one. I've taken away games, sports activities, and date nights. But I could never dream of doing something like this.
Posted by Mel Odom at 9:52 AM 1 comment: 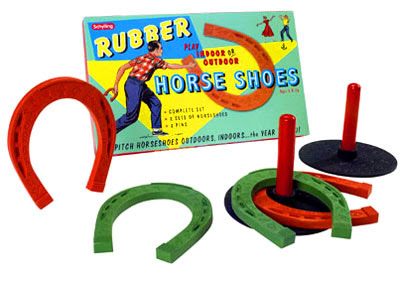 We went to my mom's today to plan putting a new roof on her house, which is going to be an adventure in itself. We went the usual way, the one my son Chandler has seen a lot.

Chandler, as regular readers of this blog will know, has aspergers. He kind of interprets the world in his own way, and assigns logic that he knows to things. Very bright kid but he continually thinks outside the box. WAAAAAYYYYY outside at times.

So today we see the Oklahoma Horseshoeing School. Seen it a lot of times. But today Chandler notices it and gives voice to the thought: "A school for horseshoeing? That's stupid. That game is really easy."

When I got through figuring out the correlation he'd made, and finished laughing, I explained.
Posted by Mel Odom at 11:12 PM No comments: