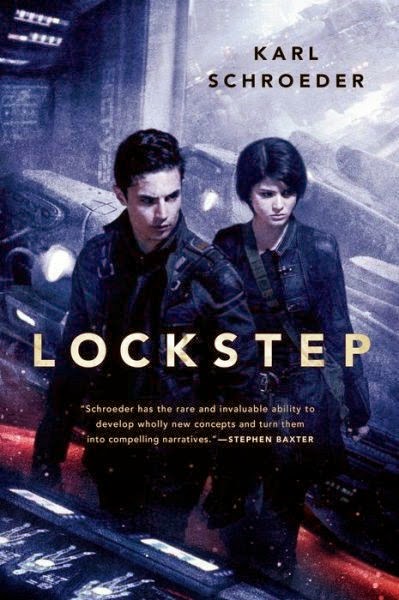 Sounds like something Robert A. Heinlein would have penned!
When seventeen-year-old Toby McGonigal finds himself lost in space, separated from his family, he expects his next drift into cold sleep to be his last. After all, the planet he’s orbiting is frozen and sunless, and the cities are dead. But when Toby wakes again, he’s surprised to discover a thriving planet, a strange and prosperous galaxy, and something stranger still—that he’s been asleep for 14,000 years.

Welcome to the Lockstep Empire, where civilization is kept alive by careful hibernation. Here cold sleeps can last decades and waking moments mere weeks. Its citizens survive for millennia, traveling asleep on long voyages between worlds. Not only is Lockstep the new center of the galaxy, but Toby is shocked to learn that the Empire is still ruled by its founding family: his own.

Toby’s brother Peter has become a terrible tyrant. Suspicious of the return of his long-lost brother,  whose rightful inheritance also controls the lockstep hibernation cycles, Peter sees Toby as a threat to his regime. Now, with the help of a lockstep girl named Corva, Toby must survive the forces of this new Empire, outwit his siblings, and save human civilization.  Karl Schroeder's Lockstep is a grand innovation in hard SF space opera. 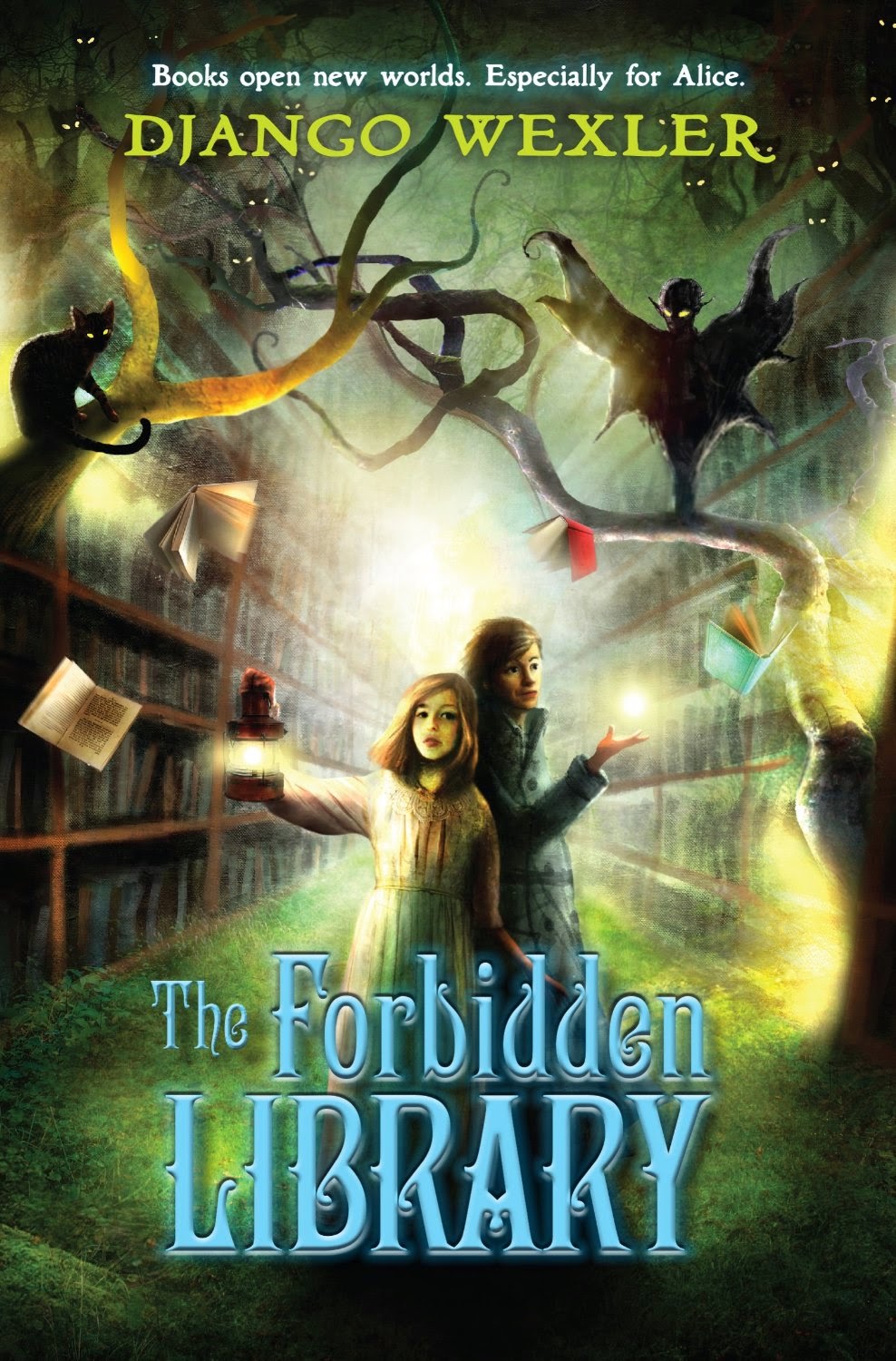 Alice always thought fairy tales had happy endings. That--along with everything else--changed the day she met her first fairy When Alice's father goes down in a shipwreck, she is sent to live with her uncle Geryon--an uncle she's never heard of and knows nothing about. He lives in an enormous manor with a massive library that is off-limits to Alice. But then she meets a talking cat. And even for a rule-follower, when a talking cat sneaks you into a forbidden library and introduces you to an arrogant boy who dares you to open a book, it's hard to resist. Especially if you're a reader to begin with. Soon Alice finds herself INSIDE the book, and the only way out is to defeat the creature imprisoned within.

It seems her uncle is more than he says he is. But then so is Alice. 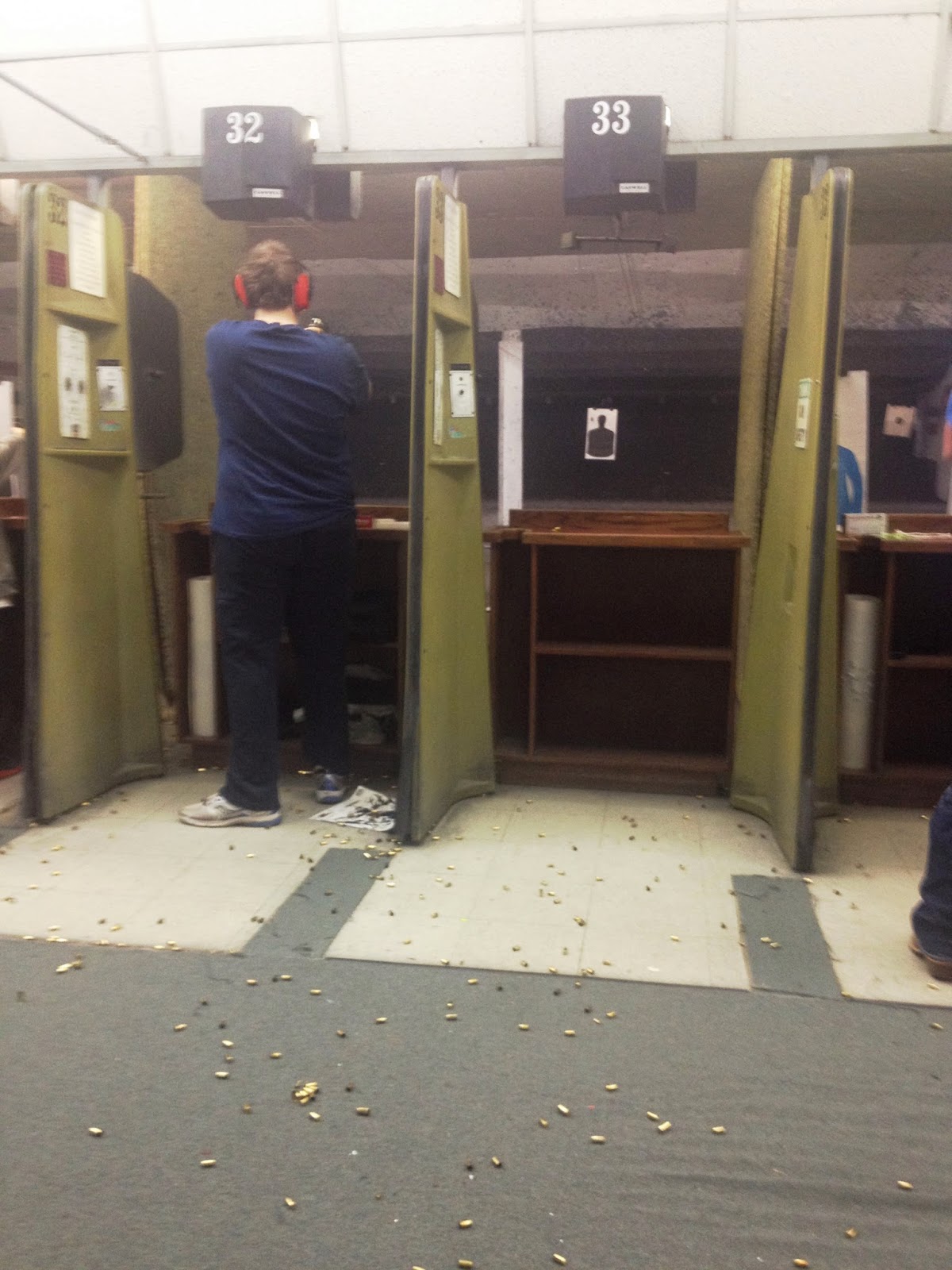 Chandler and I went to the gun range yesterday with Michael Kent and had a great time.  Until yesterday, Chandler had only felt comfortable with a 22.  He would bang away with one of those pistols for a couple of hours.
I got him to move up to a .357 Magnum pistol and .38 Special rounds yesterday.  He fell in love with the pistol and was quite proficient with it.  In the picture above, the target silhouette is all the way at the end of the range.
Those of you who know me know I am not a gun nut.  But I do like to shoot.  I don't hunt.  I have taught all of my kids to shoot on the range when they were young, usually starting at about 12 or 13.  Not to promote guns, but to promote gun safety.
Parents don't often realize how often their children have access to guns through a friend.  I teach my kids gun safety so they will know when to leave a friend's house.  There are too many stories of kids who get fascinated by guns and end up getting hurt.  A little bit of education with your child may also save another child.
These are two of the targets we shot yesterday.  We especially loved the lawn gnomes. 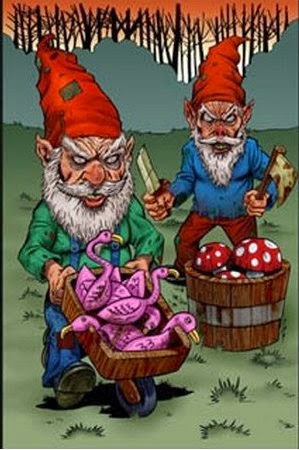 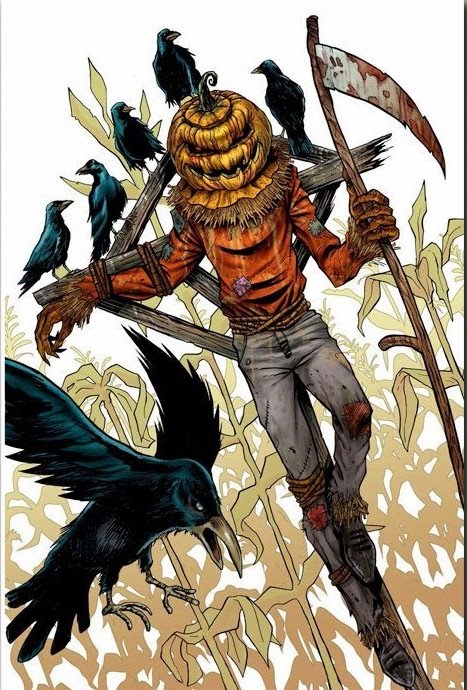 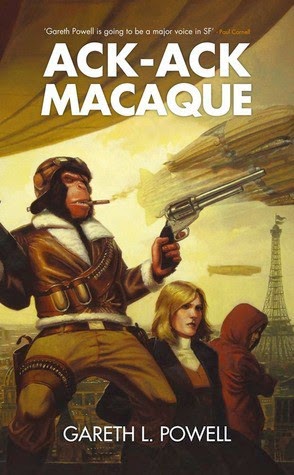 Yeah, I HAD to pick this one up!  How could I possibly resist?
In 1944, as waves of German ninjas parachute into Kent, Britain’s best hopes for victory lie with a Spitfire pilot codenamed ‘Ack-Ack Macaque.’ The trouble is, Ack-Ack Macaque is a cynical, one-eyed, cigar-chomping monkey, and he’s starting to doubt everything, including his own existence.

A century later, in a world where France and Great Britain merged in the late 1950s and nuclear-powered Zeppelins circle the globe, ex-journalist Victoria Valois finds herself drawn into a deadly game of cat and mouse with the man who butchered her husband and stole her electronic soul.
Meanwhile, in Paris, after taking part in an illegal break-in at a research laboratory, the heir to the British throne goes on the run. And all the while, the doomsday clock ticks towards Armageddon. 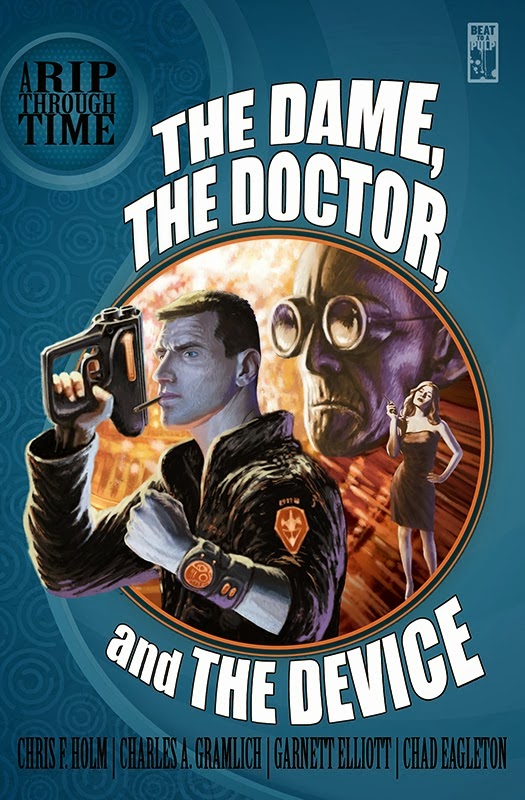 Dr. Robert Berlin has created The Baryon Core, a powerful device with the ability to predict the future and retrodict the past by tracking the position and vector of every particle in the universe. Berlin swipes his own creation from The Company and disappears into history. The Company’s time-cop Simon Rip and the sexy, brilliant Dr. Serena Ludwig join together to track Berlin and return the device. Their pursuit will take them back to the ice age and forward to the end of time.

A RIP THROUGH TIME follows the time-cop’s travels in a series of five short stories and a bonus flash piece written by several of today’s top pulp writers. Chris F. Holm opens the collection with the fast-paced “The Dame, the Doctor, and the Device.” Charles A. Gramlich’s “Battles, Broadswords, and Bad Girls” and Garnett Elliott’s “Chaos in the Stream” breathe new life into the time travel story. Bringing the saga to a gripping climax in “Darkling in the Eternal Space” is Chad Eagleton, who then takes it a step further with a mesmerizing coda, “The Final Painting of Hawley Exton.” And for all the time-traveling enthusiasts, Ron Scheer provides an insightful essay, “Are We Then Yet,” which explores the mechanics of time travel in popular fiction. 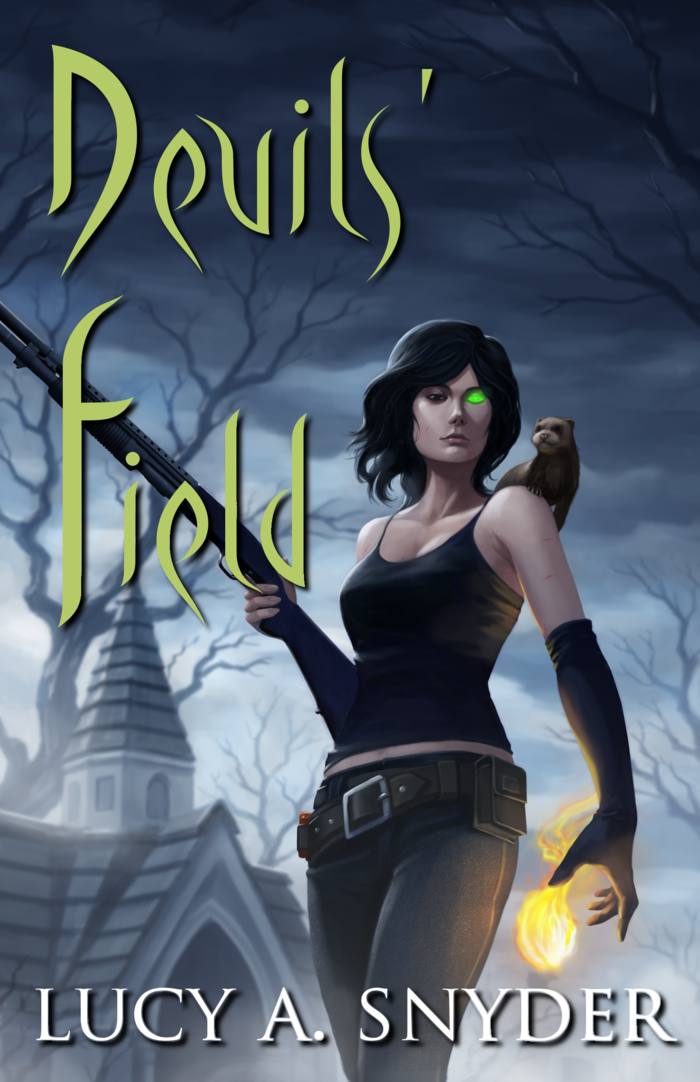 I've enjoyed Lucy Snyder's previous novels about this character, so I'm looking forward to this one.  Already backed it at Kickstater. 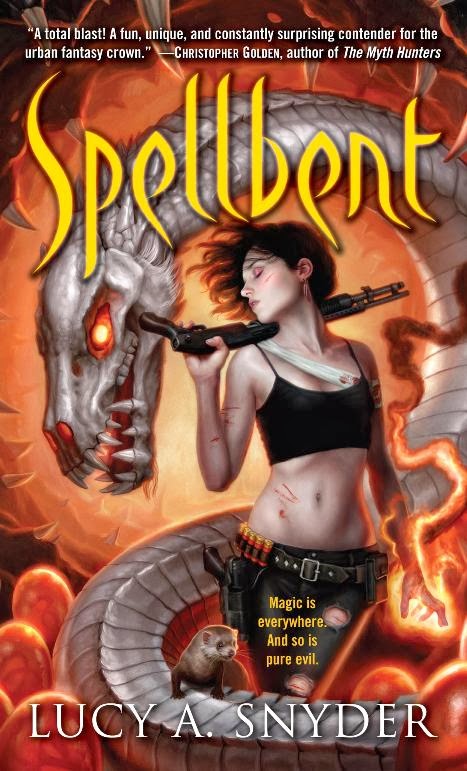 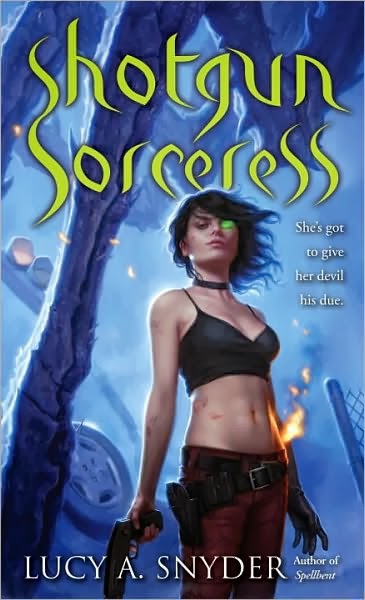 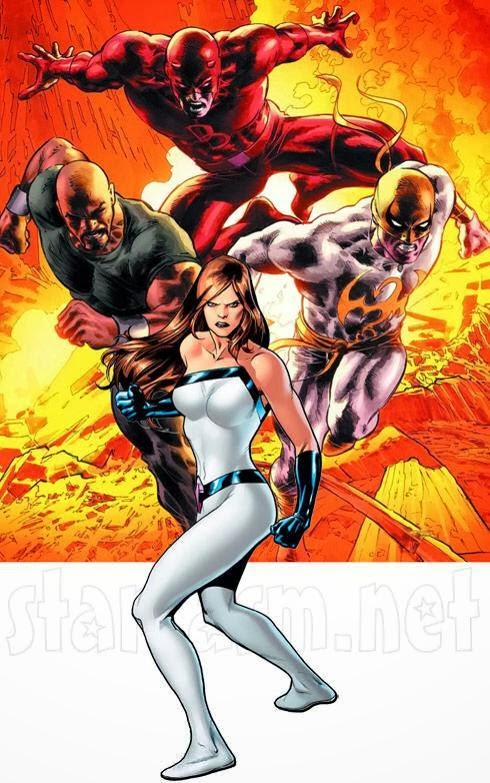 I am SOOOOOO looking forward to these shows! 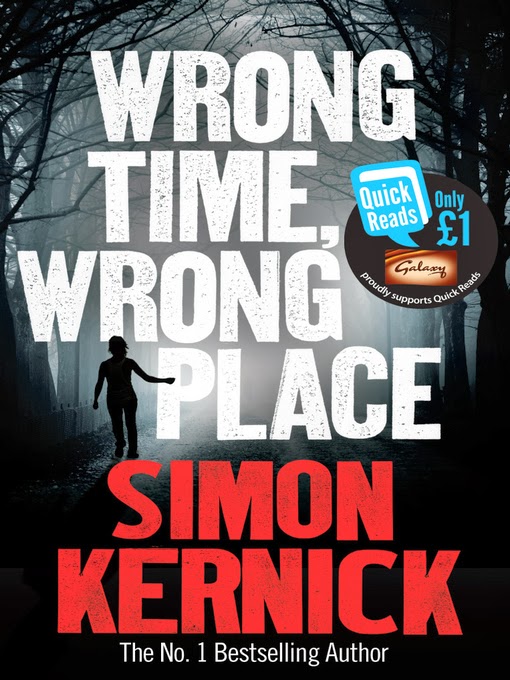 Simon Kernick’s novella Wrong Time, Wrong Place is billed as a Quick Read.  With the decline of the pulp magazines and the advent of the paperbacks, the novella got short shrift by publishers.  It was easy to stick a 20,000 word novella in with a fistful of short stories and leave readers feeling like they’d gotten a bargain.  When the paperbacks came around, the general length in the 1950s and 1960s was 50,000 to 60,000 words, which wasn’t too much of a stretch from the occasional pulp “novel” that ran 40,000 words.

Still, the ability to sit down and read a novel in a single sitting was lost to readers.  Happily, with the emergence of epublishing, this art form is once more enjoying a Renaissance that writers and readers are enjoying.

I digress, but I do so in order to point out this viable entertainment that our busy lives can use.  We work more now than ever, so we need to find entertainment that can be enjoyed and COMPLETED in a much shorter time.  Even television has gotten away from this in the continued arcs that jump from one episode to the next, so that – in effect – you’re watching a long novel in weekly installments.  Not a bad thing, but I’d rather binge watch a series like that, and when I do, it takes careful planning to avoid exhaustion and frustration.
﻿

It's been a while since I've pushed the Western series I've done with Bill Crider and James Reasoner, so here's a reminder that the books are still out there.  Round 'em up and settle in for some good, quick reads during the ugly weather that never seems to go away.

Here's a link to Amazon's Rancho Diablo pages.  The books can be read in any order, but to get the full effect, you'd be better served starting with the first one because it sets up the series.


Show all 8 books in the Rancho Diablo series
Posted by Mel Odom at 10:05 AM 2 comments: