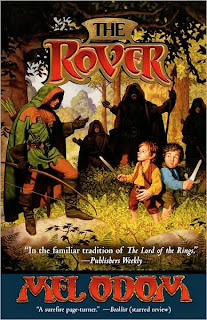 Edgewick Lamplighter (Wick to his friends) is a humble librarian in the isolated halls of Greydawn Moors until dreams of wanderlust and a bit of dereliction in his duties result in his being shanghaied to a far-off land.

Captured by pirates, sold into slavery, and adopted by a gang of thieves, Wick soon finds himself with more adventures than even a halfling librarian can imagine.

Rival gangs, goblin marauders, evil wizards, and monstrous dragons are soon after the wee adventurer and his newfound allies in a tale of treasures and treachery, magic and mystery, where even a little guy can rise to the occasion and save the day. 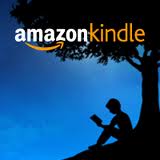 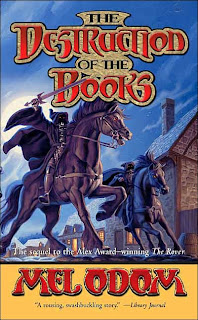 Mel Odom's award winning quest fantasy The Rover was hailed as a successor to the legacy of Tolkien and Terry Brooks. The tale of "Wick" the lowly librarian who rises to the occasion and becomes a great adventurer struck a chord with adventure lovers and fantasy fans alike.

After his adventures on the mainland Wick returned to his duties at the Vault of All Known Knowledge and quickly worked his way up the hierarchy , continuing his quest for the preservation of books and the knowledge contained therein.

And now that quest is threatened.

The Destruction of the Books

It is many years later and lowly Wick is now Grandmagister Lamplighter of the Great Library. His trips to the mainland are fewer due to his advanced age, and lately he has enlisted an assistant by the name of Jugh to undertake those roving duties he used to relish.

An encounter with a goblin ship on the high seas leads to Jugh's discovery of a book in goblin hands, a most matter that must be investigated.

This single event leads to startling revelations that forewarns of a great evil that exists that is every bit as powerful as the Vault of All Known Knowledge, and whose presence in the Great Library may indeed result in

The Destruction of the Books 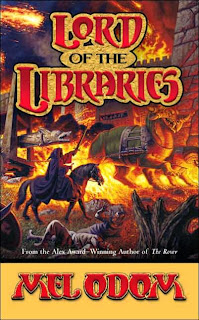 In The Destruction of the Books, the Vault of All Known Knowledge was destroyed and its learned caretaker abducted, leaving the forces against darkness without resource and leadership.

The world as they know it and all that is good are now threatened by the same shadows that have oppressed the continent beyond the sea.

The only hope for enlightenment and salvation lies in a lowly librarian adventurer named Juhg who unknowingly brought about the cataclysm, and now must save the day by seeking out his master and another store of knowledge that has been held in secret, and in doing so unlock the mysteries of the past so as to allow the emergence of a new guardian…

THE LORD OF THE LIBRARIES. 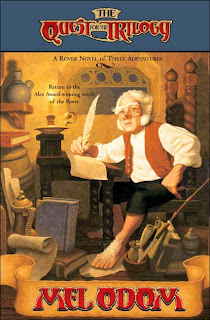 The secret to protecting the civilized world from an ancient threat may lie in the pages of three books…and it is up to master librarians of the past and present to secure these pages of knowledge.


Set in the years after Lord of the Libraries, young halfer Juhg is still growing into his job as Grandmagister when an ally from the past, the wizened wizard Craugh returns with warnings of an ancient threat that may resurface--the so-called "Kharrion's Wrath" which endangers the existence of the world. Juhg must now unlock the secrets contained in the journals of his now absent mentor Wick, the former Grandmagister and legendary hero known as "The Rover." He must also continue his documented but clandestine search for a trilogy of books, which brings him through many different realms of their very dangerous world…and into conflict and contact with other races (elves, dwarves, and men) whose fates are all intertwined among the pages of the great book of Time.


The Quest for the Trilogy weaves three separate quests into one as the young historian races against the clock to protect not just his world, but all others as well.

Enjoyed this series of books, will there be another in the series?