I gotta admit, I was really leery of this television show.  Oliver Queen (Green Arrow) has long been one of my favorite heroes.  After he got the makeover and the attitude adjustment in the 1970s by Denny O'Neill and Neal Adams.
Bleeding heart, social gadfly, serial romantic, Ollie was a lot to deal with for anybody.  He'd win me over, then break my heart.  The man never had an easy life.  His love life was a mess, his ward became a junkie (one of the first heroes to succumb in comics), and he didn't know if he wanted to rage against the machine or remake the machine in his own image.  He stepped over the line as a vigilante more than once and earned the ire of his family and his friends.
His death didn't get any easier.  Yeah, DC killed him to create Connor Hawke, the new Green Arrow -- and DC later destroyed him, and now he's been retconned completely out of existence in the New 52 brand.
To be fair, I think that Green Lantern's death was much worse.  He came back as the Spectre for a time, which was entirely weird.
The television show is a guilty pleasure.  My wife is even interested in it.  The series has set Ollie up as a Batman like vigilante, which stands to reason because Green Arrow was kind of like a Batman knockoff back in the day (Batmobile = ArrowCar, Batplane = ArrowPlane [get it?]).  But this version of Ollie is mean and tough and physically capable in hand-to-hand combat.  He's struggling with the whole dual identity thing, only it's taking shape right in front of our eyes.
Before Ollie supposedly "died" five years ago, he was an irresponsible playboy.  He took his girlfriend's sister out on a cruise for some illicit romance and got her killed.  See?  The showrunners are making sure Ollie's love life is screwed up.  Then he comes back from this island a changed man, no longer the playboy and now every ounce a man willing to put his life on the line.
It's a big change.  His body is covered in scars.  He's learned archery, martial arts, Russian, some kind of parkour/free running, and a whole new way of looking at life.  Instead of giving viewers an "origin" story, the series is parsing out the information in brief, tantalizing flashbacks in the middle of a cornucopia of plot problems and all-out action.
If you haven't caught the series yet, you should.  Do it now before the plotlines get more tricky and more advanced and you don't get to see the battlelines being drawn or the group of avengers come together. 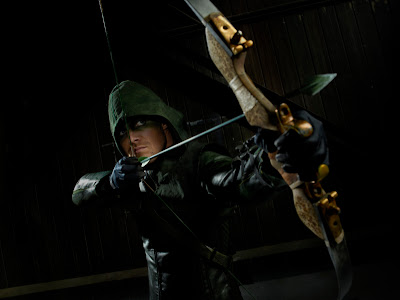