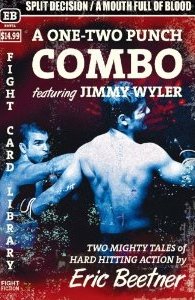 A One-Two Punch Combo combines both Fightcard adventures featuring Jimmy Wyler - Split Decision and A Mouth Full Of Blood - into one volume. The Fightcard series of novellas has been praised as, "lean and mean." "a hard hitting, fast moving series." and "you'll smell the sweat and leather in the air and find yourself bobbing and weaving with the action." In these two hard-hitting action stories mid-level boxer Jimmy Wyler continues the tradition.
SPLIT DECISION: Jimmy Wyler is a fighter punching his way straight to the middle. All he wants is to make enough dough to buy his girl, Lola, a ring. And maybe make the gang back at St. Vincent?s orphanage proud. A slick mobster named Cardone has an offer for Jimmy ? money, and lots of it ? for a fix. Jimmy takes the fight. The ring is almost on Lola?s finger, until Jimmy collides with Whit ? another mobster with another up-and-coming fighter. Whit has an offer of his own. Same fight, different fix. Now Jimmy is caught between two warring factions of the Kansas City underworld. He can?t make a move without someone getting mad, getting even, or getting dead. From sweat-soaked fight halls to darkened alleyways, the countdown has begun. With his girl and his manager in the crossfire, everything Jimmy ever learned about fancy footwork and keeping his defenses up may not be enough ? Fight night is approaching and nobody is going to be saved by the bell.
A MOUTH FULL OF BLOOD: A year after the pulse-pounding action of Split Decision, Jimmy Wyler is back in Chicago trying to put his life back together. Working a job washing dishes in a late night diner, Jimmy vows to never get into a boxing ring again. But then, someone needs him. Leo, a teenaged boy who fights hard against the city every day, could use a man like Jimmy. To help save him from his alcoholic father, and to save his only sister from a pimp bent on turning her out. Jimmy must fight again. Fight for the ones who can?t fight for themselves. It will take him from fistfights in back alleys to no rules bouts with crowds screaming for blood and all the way back to the orphanage where he grew up. Along the way, blood will be spilled and knuckles will be bruised. More white-knuckle action and epic fights from the Fightcard series.